Click the button for detailed information or scroll down

[This event is a lecture and book signing]

Jerry Saltz is the senior art critic at New York magazine and its entertainment site Vulture. He is the winner of the 2018 Pulitzer Prize in Criticism and a 2019 National Magazine Award. Before joining New York in 2007, Saltz had been art critic for The Village Voice since 1998, and was twice nominated for the Pulitzer Prize during his tenure there. A frequent guest lecturer, he has spoken at the Museum of Modern Art, the Guggenheim, the Whitney Museum, and many others, and has appeared at Harvard, Yale, Columbia, the Rhode Island School of Design, the Art Institute of Chicago, and elsewhere.

Since the 1990s he has been an indispensable cultural voice: witty and provocative, he has attracted contemporary readers to fine art as few critics have. An early champion of forgotten and overlooked women artists, he has also celebrated the pioneering work of African American, LGBTQ+, and other long-marginalized creators. Sotheby’s Institute of Art has called him, simply, “the art critic.”

Praise for Jerry Saltz:
“The world’s most famous and celebrated contemporary art critic.” —GQ
“One of the most powerful art critics today.” —Time Out
“A critic of the people, bringing art to a broader audience.” —Architectural Digest

[This event is an interview/Q&A and book signing]

Michelle Zauner is best known as a singer and guitarist who creates dreamy, shoegaze-inspired indie pop under the name Japanese Breakfast. She has won acclaim from major music outlets around the world for releases like Psychopomp (2016) and Soft Sounds from Another Planet(2017). Her most recent album, Jubilee (2021), earned two GRAMMY nominations for Best New Artist and Best Alternative Music Album. Her first book, Crying in H Mart, is an unflinching, powerful memoir about growing up Korean-American, losing her mother, and forging her own identity. It became a New York Times Best Seller, and she’s currently adapting the memoir for the screen for MGM’s Orion Pictures.

Crying in H Mart: A Memoir is an exquisite story of family, food, grief, and endurance. With humor and heart, Zauner tells of growing up one of the few Asian American kids at her school in Eugene, Oregon; of struggling with her mother’s particular, high expectations of her; of a painful adolescence; of treasured months spent in her grandmother’s tiny apartment in Seoul, where she and her mother would bond, late at night, over heaping plates of food.

As she grew up, moving to the East Coast for college, finding work in the restaurant industry, and performing gigs with her fledgling band–and meeting the man who would become her husband–her Koreanness began to feel ever more distant, even as she found the life she wanted to live. It was her mother’s diagnosis of terminal cancer, when Michelle was twenty-five, that forced a reckoning with her identity and brought her to reclaim the gifts of taste, language, and history her mother had given her.

Vivacious and plainspoken, lyrical and honest, Zauner’s voice is as radiantly alive on the page as it is onstage. Rich with intimate anecdotes that will resonate widely, and complete with family photos, Crying in H Mart is a book to cherish, share, and reread.

Praise for Crying in H Mart:

One of President Obama’s Favorite Books of the Year 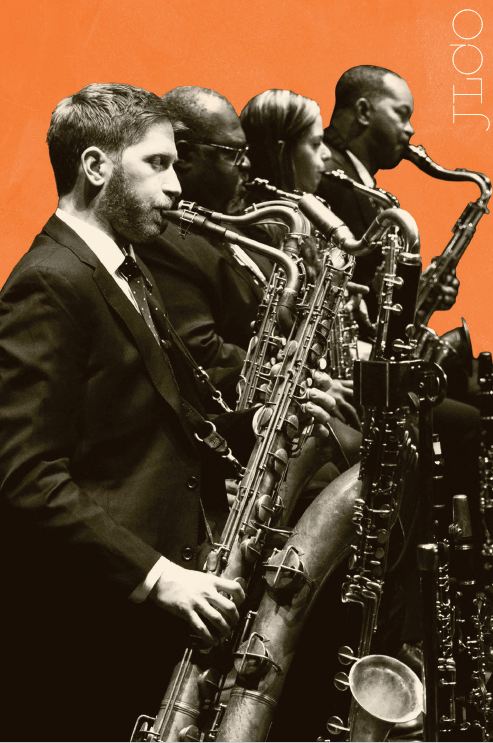 [This event is a music performance]

Tickets must be claimed at the Murchison Performing Arts Center Box Office. Box office hours are M-F 1pm-5pm; or, on the day of the event, 1.5 hours before the concert starts. For additional information call the box office at 940-369-7802.

$30 General Public tickets can be purchased at https://tinyurl.com/JLCOatUNT

With the world-renowned Jazz at Lincoln Center Orchestra and guest artists spanning genres and generations, Jazz at Lincoln Center produces thousands of performances, education, and broadcast events each season in its home in New York City (Frederick P. Rose Hall, “The House of Swing”) and around the world, for people of all ages. Jazz at Lincoln Center is led by Chairman Clarence Otis, Managing and Artistic Director Wynton Marsalis, and Executive Director Greg Scholl. Please visit us at jazz.org.

[This event is a spoken word poetry performance]

Brandon Leake, winner of America’s Got Talent Season 15, is an artistic visionary whose roots lie in Stockton, California. Brandon started Called To Move at Simpson University with a small group of artists trying to share their gifts and encourage others to do so, which has grown into a national initiative that has inspired audiences through poetry all across the country. In 2016, Brandon Leake released a debut album entitled, “In My Thoughts”, and since has traveled from LA to New York and everywhere in between performing his pieces, leading spoken word poetry workshops, and keynote speaking. He's performed at conferences, universities, and theatres nationwide - leaving audiences speechless by his beautiful words.

"It Gets Better or it Doesn't"

Emmy Bright received her BA from University of Chicago, a M.Ed from Harvard and MFA from Cranbrook in Print Media. She has had Fellowships to the Ox-Bow School of Art in Michigan and New Urban Arts in Rhode Island. She has taught at RISD, City College New York and she has been a visiting artist for the Museum School in Boston, Brown University, and the RISD Museum. She has produced commissioned projects for the DeCordova Museum and Sculpture Park and Brown University. She currently lives and works in Detroit where she is represented by David Klein Gallery.

"I make performances, drawings, prints, and zines that merge high theory, pop songs, psychoanalysis, comedy, art history and philosophy. Disciplinary language can conscript us into certain ways of thinking, but it can also be undone and used against itself. My practice is about undoing, compelling systemic logic to attack itself. I champion the stupid, the wrong, and the failed narrative; I make comparisons that fall apart and diagrams that try to explain but instead contain their own undoing. I work to upend normative good sense in order to find something more complex, gnarly, and real." - Emmy Bright

Stay up to date with us on social media: