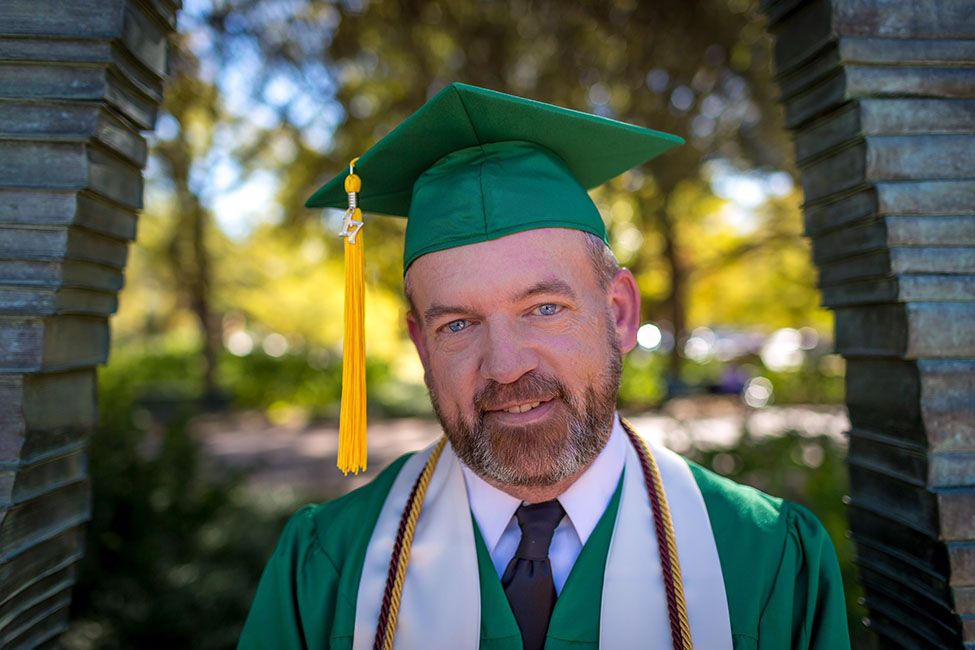 For UNT alumnus James White, walking across the stage at commencement in fall 2017 was the ultimate payoff for his hard work and the sacrifices he and his family made as he pursued his dream of becoming a college graduate.

White came to UNT in 2015 as a non-traditional student, though he had followed a more traditional path of going to work full-time and starting a family after graduating high school. Through the years, he had attempted junior college, but it was never the right fit and he had a wife and children to support at that time. Once his oldest child completed college, things began to change. “My job in customer service was a way to pay the bills, but I wanted more,” said White. “I wanted to follow my dream of helping people in different ways. I also wanted to be an example for my children and show them that you should always keep fighting for your dreams.”

After receiving the support of his family and obtaining financial aid, White left his full-time job and became a full-time UNT student majoring in psychology with a minor in counseling. But his start was not without its challenges. Often mistaken as the father of a student, White also was thrust into an educational environment that relied heavily on technology to which he was unaccustomed, such as submitting assignments and papers online.

“I felt a bit like an outsider at first, but the students in my classes quickly accepted me and became great friends while I learned the ropes,” said White. “The students and my professors also appreciated the different perspective that I brought to my classes.”

The Student Activities Center’s Off-Campus Student Services, which provides services specifically for non-traditional students, also played a major role in White’s success at UNT, helping him make the transition into college life and identifying scholarships for him. “The staff were helpful in my assimilation into the college atmosphere and gave the encouragement that was often needed for me to continue,” said White. “Having the support of this department was definitely a blessing.”

Wanting the full collegiate experience, White became an active member on campus, serving on the Supreme Court for SGA. He also became a member of the Alpha Sigma Lambda National Honor Society, through which he applied for and received a scholarship at the time he needed it the most when problems with his financial aid threatened to postpone his final semester.

“I can’t say enough good things about the organization, and I would not have been able to finish my education without receiving the ASL scholarship,” said White. “I am so grateful for the staff and professors who supported my application.” Since graduating, White is using his time to study for and take the GRE and apply to graduate school at UNT. He hopes to purse his master’s degree in counseling with a specialization in play therapy.

“I’ve always wanted to work with children and help them to express themselves,” said White. “Helping others, especially children, in making sense of the world around them and overcoming challenges has always seemed to be something that I have been drawn towards.”

For anyone else considering going back to college, White recommends gathering the support of family and friends and being prepared to make the commitment.

“You have to have the mindset that this what you are going to do no matter what it takes,” said White, who also hopes that his story inspires others to attend UNT. “Anyone can become a part of UNT no matter what type of student you are. You only go through this life once, and we should each do our very best to experience and enjoy as much of it as we possibly can.”